Power2Build is an Angolan technology startup, that uses innovation and new technologies in the construction industry to create faster, more sustainable, and efficient processes. The goal is to use technology, such as 3D Printing solutions, to significantly reduce the housing crisis in Angola, and other countries in Africa, by providing solutions that allow to build affordable and high-quality housing in the region, in a faster and more competitive way, to private and public entities and non-governmental organizations (NGOs).

Game-changing cost savings
In 2021, Power2Build printed Angola’s first 3D printed building – a 53 m2 (570 sf.) house. This in itself was an incredible milestone for the company, but the house served a bigger purpose. The project was the beginning of the concrete revolution, as the house was the World’s first 3D printed real concrete house. Power2Build used a ground-breaking solution developed by COBOD and CEMEX, and it achieved cost savings of 90%. This was due to 99% of the material was sourced locally and only 1% was provided by COBOD.

This was and still is an incredible milestone as it contributes majorly to solve Angola’s and Africa’s affordable housing crisis. With such low materials prices, the strength and quality of concrete combined with the speed and automation of COBOD’s 3D construction printing technology, Power2Build can help solve the affordable housing crisis in Angola and elsewhere. 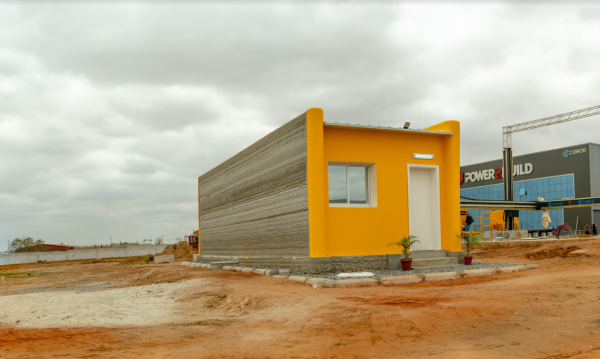